Priscila pointed out that it's best to back up the words i used in the last post with our real patients and stories. i hope these are not too much, but they are typical to show the limits we face. The first one happened last Saturday, where at the end of rounding on childrens ward, Sr Nelson ran up with a 1 year old child he said had just aspirated a bean. It was obvious that the child was in respiratory distress and her lungs alternatively sounded completely obstructed and partially obstructed when i put the stethoscope to her chest. We took her to the operating room, but i knew the situation was bleak: no oxygen (we've been out of concentrators for more than 2 months and without cylinders for more than 3 weeks); no rigid bronchoscope, no retrieval forceps. As i limped to the warehouse to look for anything to use, i alternated between cursing the situation, being frustrated at the child and praying for a miraculous cough to dislodge the bean. The poor child was doing what all toddlers do: exploring and testing everything by putting objects in her mouth. . . i felt ashamed for being angry with her; and i felt ashamed as an emergency-trained doctor: i had no laryngoscope blades small enough, but more important to this emergency, i had no rigid bronchoscope. We tried with the best of what i could think of. Using a cystoscope as a flexible bronchoscope, i could see the bean in the trachea but had no success trying to lead in a stylet to perhaps dislodge the bean nor a foley catheter which would not cooperate to go down the airway. i tried Heimlich thrusts, but i knew i was just grasping and hoping for things we did not have. Given that our ambulance was not around and the family had no money to go to a private hospital outside Lubango (CEML), we asked the family take a taxi as soon as they could to Lubango to the Pediatric hospital in hopes that they would either provide urgent care or send the girl along to the right hospital. Apparently, they did get a taxi ride, but the taxi did not go too far down the road before it turned back and brought the child back, limp. i heard that the staff then tried to resuscitate, but to no avail.

This could have been our child; shucks, the same week i had to pull out a stone, and then a bean and then a bead from Eliel's nostril. But the event also typifies some of my frustrations here: working in a place with few to no materials; working with an administration that seems to show no desire to pursue more materials; and at the end of it all, only being able to tell the patient or the family, "i'm sorry, i can't help." i'm not a surgeon, i'm not a pediatrician, i'm not an oncologist, i don't have medicines, i don't have a battery of lab tests, i don't have much. i wish i knew more, i wish i had more, i wish i could do more. But at the end of most days, i just want to read a book to Zeke, tickle Eliel, laugh with Naomi and talk to Priscila. This isn't heroic work. And i know, at times, i let my patients and their families down.

The next story is more uplifting, i promise. It's of the boy pictured below and his brother. They came to Kalukembe back in March, having each been bitten by a puff adder in their legs the week before. After a failed round of traditional medicines, their limbs were in bad shape. J ended with an above knee amputation and his brother, F,  fought weeks of infection that finally settled with thus far just a few toes taken off. We had no antibiotics when they came, so the family went looking around in the pharmacies for the injectables i prescribed. Then we ran out of dressings and they went days at a time without changes during critical phases for controlling their infections. And they also came at a time when we had no tetanus ( i hoped treating with penicillin and metronidazole would take care of that). In the beginning, they cried any time i entered their room. They associated me with all the painful care they had received, including dressing changes over large debrided wounds without pain medication. But over the weeks, as the debridements became fewer and the antibiotics and dressing changes took effect, they have been two of the brightest smiles on our ward. They love drawing pictures and keep wearing down the pencils i give them. Their parents haven't the money for the skin grafts they would benefit from, but i won't push the matter, either. We don't have dermatomes and our methods don't bring high success or "takes." J and F continue to show exuberance with their crutches and wild laughter any time i'm around.


The girl below was brought by her mother last week after 3 months of progressive worsening mobility and head growth (hydrocephalus). By the time i saw her, she was comatose, dilated pupils and papilledema without a doubt. She stopped breathing that very hour, but through a nurse's persistent bag valve mask breathing and some dextrose, she pulled through the night in our intensive care, getting intermittent positive pressure. . . no supplemental oxygen, no ventilator. The next day, we finally had our ambulance but had no driver. Then we had a driver but the family had to pay for fuel to get our ambulance to a private hospital in Lubango and also decide if they would pay the costs there. Finally, she was taken and Dr. Annelise Olson operated that night and placed a ventriculoperitoneal shunt in her. As of today, i am told that she is responding to pain. No CT scan of her head will likely ever be done--the cost is too prohibitive and it's too difficult for most people to go to Huambo. But, we hope she has a benign process (something like an ependymoma, please) and her young, plastic brain will wake up. Already, it's been an answer to prayer that she has made it through the transfer process and surgery.


Posted by Daniel and Priscila Cummings at 4:54 PM No comments:
Email ThisBlogThis!Share to TwitterShare to FacebookShare to Pinterest


Water renovation work will be breaking ground (we hope) next week. This is exciting and we hope to see results flow! We'd also like to share some other work that has been done around the hospital in the meantime. One of the things has been renovation of the bathrooms and windows on the maternity and women's wards. And along with it, the pediatrics ward received a paint job. We hope that these small improvements will give our patients at least some encouragement. And give recognition to the staff that, through improving their environment, they could also see how their work matters to us and to others around.


Posted by Daniel and Priscila Cummings at 8:09 AM No comments:
Email ThisBlogThis!Share to TwitterShare to FacebookShare to Pinterest

Have you wondered where we've been? Still in Kalukembe and here to share our latest update. 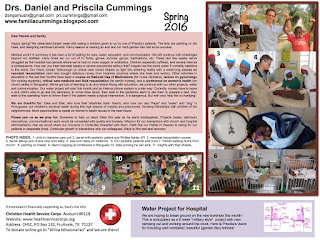 Posted by Daniel and Priscila Cummings at 4:50 AM 1 comment:
Email ThisBlogThis!Share to TwitterShare to FacebookShare to Pinterest
Newer Posts Older Posts Home
Subscribe to: Posts (Atom)