Our friend Pedro and his brother Avozinho ("Little Grandfather") had been picking, as they often do, unripe guavas for several hours in our yard. It was still early, but he called out, a respectful distance from the front door, and asked to speak to me. It was unusual for Sunday morning, but I went out, and he shyly asked if he could have something to eat, "The Hunger" was too much he said.... explaining quietly that he and Little Grandfather hadn't eaten in three days. His mother was sick and couldn't sell fish and his pregnant 16yo sister was gambling away the money she earned, refusing to buy food. Breakfast in Angolan Portuguese is known as "Mata Bicho" : "kill the beast" ... and the beast of hunger was still strong in Pedro's belly.

Pedro is 10yo and a full foot shorter than our Ezekiel (also 10yo), probably from malnutrition. His head is scarred and indented in a corner, and I've always wondered who beat him there as a child. The boys used to tease him for his funny shaped head. He lives in a small, crumbling, adobe house in the "Sanzala" neighborhood (in Brasil "slave's quarters"). He just started going to school (after many years of encouragement), though has a somewhat erratic attendance given his responsibility to feed his siblings. He usually is selling small piles of bananas or advocados for a profit of 5cents, which he mostly has to give to his parents. His home life is sad, dark, abusive, with a mother accused of witchcraft, being responsible for the death of a grandchild and selling poisoned fish. But Pedro is a kind, quiet child. There are often several other small children who usually follow him as they scavange for food, especially Avozinho, whom he cares for like a father.... Avozinho reaching for his hand and Pedro always clasping it with tender reassurance.

Of course we prepared Pedro a good meal. After all, I've known Pedro for 5 years now. He is our friend. He's consistent, kind, honest and trustworthy. So I was surprised on Thursday when in the middle of work in the OR, doing a fistula repair, I hear a conversation behind me about a student's computer being stolen by one of "my" friends from the slums next to the hospital.  I can only imagine what hunger will drive a child to do, but it was surprising to hear that it was Pedro. Others accused him of stealing a computer last year, of regularly breaking and entering homes, and his father said the young men holding him hostage could do with him what they willed: he was a child who "messed around too much anyway." The young men beat him, trying for a confession and discovery of the computers location. He didn't know.

I confronted him yesterday morning, the self-righteous lady that I am (God forgive me). I asked in an almost accusatory tone, what he had done. He related the whole day, and ended asking me in a tired hoarse voice that seemed to have repeated the story over and over, "would I not have told them, as they beat me, if I had known?" I tried a different angle, reminding him I was his friend and didn't want to find out later. He stood his ground. I finally brought up God, as if He were my last card, saying we are people of Truth, and don't lie. That liars, as my father always said, are children of the Devil. He said he wasn't.... then he prayed, quietly saying "Jesus, where I walk you are, were I was you were too."

And as he prayed, I confessed. Jesus, walk with me too. Pedro doesn't often go to church, unless he and Avozinho are wearing Zeke and Eliel's old clothes, but he walks The Walk. You can judge a man by what he says in the church, but as others have pointed out, it's what he does outside that matters more. 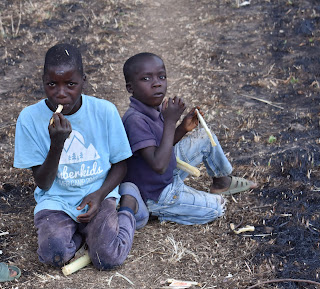 Posted by Daniel and Priscila Cummings at 3:36 PM
Email ThisBlogThis!Share to TwitterShare to FacebookShare to Pinterest